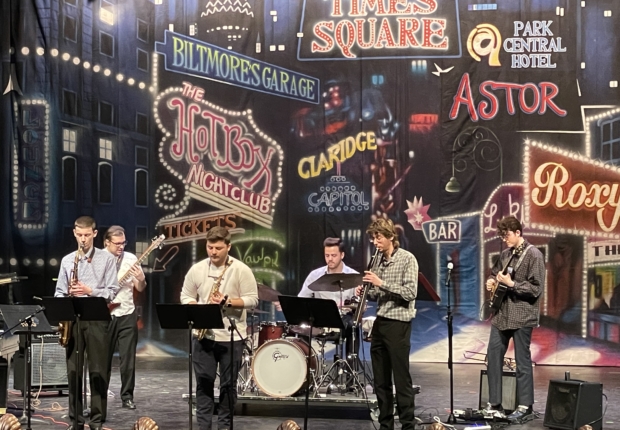 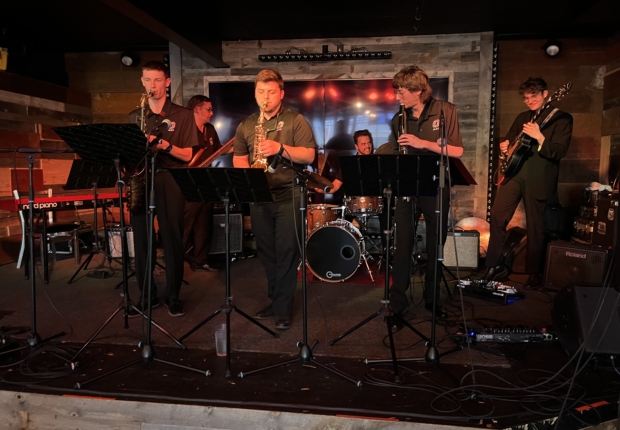 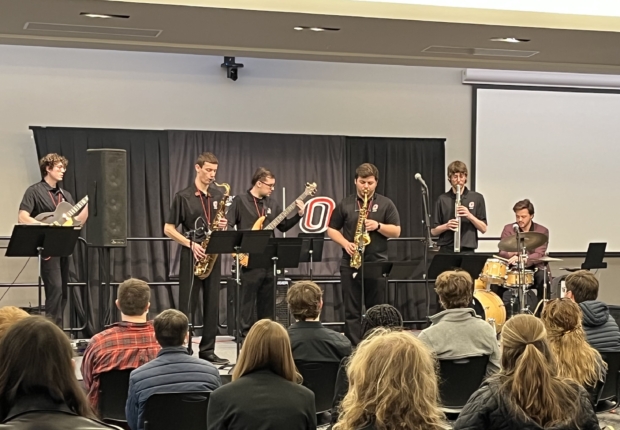 The UNO Jazz Combo performs original works composed by members of the ensemble. Their output is inspired by eclectic influences including rock, funk, grunge, metal, fusion, blues and jazz. The group tours across the United States and abroad, participating in major jazz festivals and performing at schools, clubs, and performing arts centers. In January of 2020, the UNO Jazz Combo was selected by an internationally competitive recorded audition process for a featured performance at the Jazz Education Network (JEN) International Conference in New Orleans, Louisiana. Featuring the unique instrumentation of saxophones, electric guitar, electric bass, drums, and Electronic Wind Instrument (EWI), the UNO Jazz Combo presents a high-energy, adventurous, spontaneous program that entertains audiences of all ages.

Dr. Darren Pettit – UNO Jazz Combo Director
Dr. Darren Pettit is Associate Professor of Music Theory and Composition at UNO. He received his bachelor of music degree in saxophone performance from UNO in 1995prior to earning a master of music degree in saxophone performance from the University of Cincinnati College Conservatory of Music where he completed a master of music degree in saxophone performance. He then received his D.M.A in Jazz Studies/Composition at the University of Nebraska-Lincoln where he studied with Dr. Eric Richards. Dr. Pettit’s duties at UNO include directing the Jazz Combo I, coordinating both dual enrollment and music theory for the School of Music, teaching Music Fundamentals, Music Core Curriculum I & II, Jazz Arranging, Orchestration, Pedagogy of Music Theory, and Analysis for Performers. Dr. Pettit has premiered original compositions at the Daidogei Festival in Shizouka, Japan, the Beijing Contemporary Music Academy, the Shanghai Conservatory of Music, the Pennsylvania Music Educators Association Regional Conference, the University of Missouri-St. Louis, Mercer University in Georgia, and the University of Nebraska-Lincoln & Omaha. He has toured extensively throughout the United States as the music director for Yesterday and Today and Rave On, and has performed with the Jim Widner Big Band, the Omaha big Band, the Las Vegas Lab Band with Mike Gurcuillo, the Nebraska Jazz Orchestra, the Omaha Symphony, the Omaha Community Playhouse, Randy Brecker, Diane Schuur, Debbie Boone, Delbert McClinton, the Temptations, David Foster, Michael Buble, Frankie Valli, and many others. Dr. Pettit is a D’Addario Artist/Clinician.

Dr. Pete Madsen – UNO Coordinator of Jazz Studies
Dr. Pete Madsen received a bachelor of science degree in music education from the University of Missouri, a master of music degree from Northern Illinois University, and a doctor of musical arts degree in trombone performance from the University of Illinois. Dr. Madsen’s duties at UNO include directing the jazz ensembles and jazz combos, coordinating the UNO Great Plains Jazz Festival, and the UNO Jazz Camp and teaching applied low brass, jazz pedagogy and improvisation. He has performed extensively in jazz, pop, and classical venues, having played with Bill Watrous, Pete Christlieb, Aretha Franklin, Frank Valli, the Jim Widner Big Band, the Omaha Big Band, the Nebraska Jazz Orchestra, the Omaha Jazz Orchestra, the Illinois Symphony, the Omaha Symphony, the Omaha Brass Ensemble, and the Missouri Symphony Society. Dr. Madsen has recorded on the Chase, Albany, Summit, and Nonesuch record labels. Dr. Madsen is also in high demand as a guest artist/clinician and has performed and/or adjudicated throughout the United States and in Europe, Japan, and Brazil. As a member of the Continental Trombone Quartet, Dr. Madsen has performed and presented clinics at the Eastern Trombone Workshop, the Midwest Clinic, and the International Association for Jazz Education International Conference. The Continental Trombone Quartet has also performed in Spain, Mexico, Brazil, China, and Canada. Dr. Madsen is currently serving as All-State Jazz Band Coordinator for the Nebraska Music Educators Association and is a Getzen Artist/Clinician.

We use cookies on our website to give you the most relevant experience by remembering your preferences and repeat visits. By clicking “Accept”, you consent to the use of ALL the cookies.
Sīkdatņu iestatījumiPiekrītu
Mainīt sīkdatņu iestatījumus

Performance cookies are used to understand and analyze the key performance indexes of the website which helps in delivering a better user experience for the visitors.

Analytical cookies are used to understand how visitors interact with the website. These cookies help provide information on metrics the number of visitors, bounce rate, traffic source, etc.

Advertisement cookies are used to provide visitors with relevant ads and marketing campaigns. These cookies track visitors across websites and collect information to provide customized ads.

Other uncategorized cookies are those that are being analyzed and have not been classified into a category as yet.